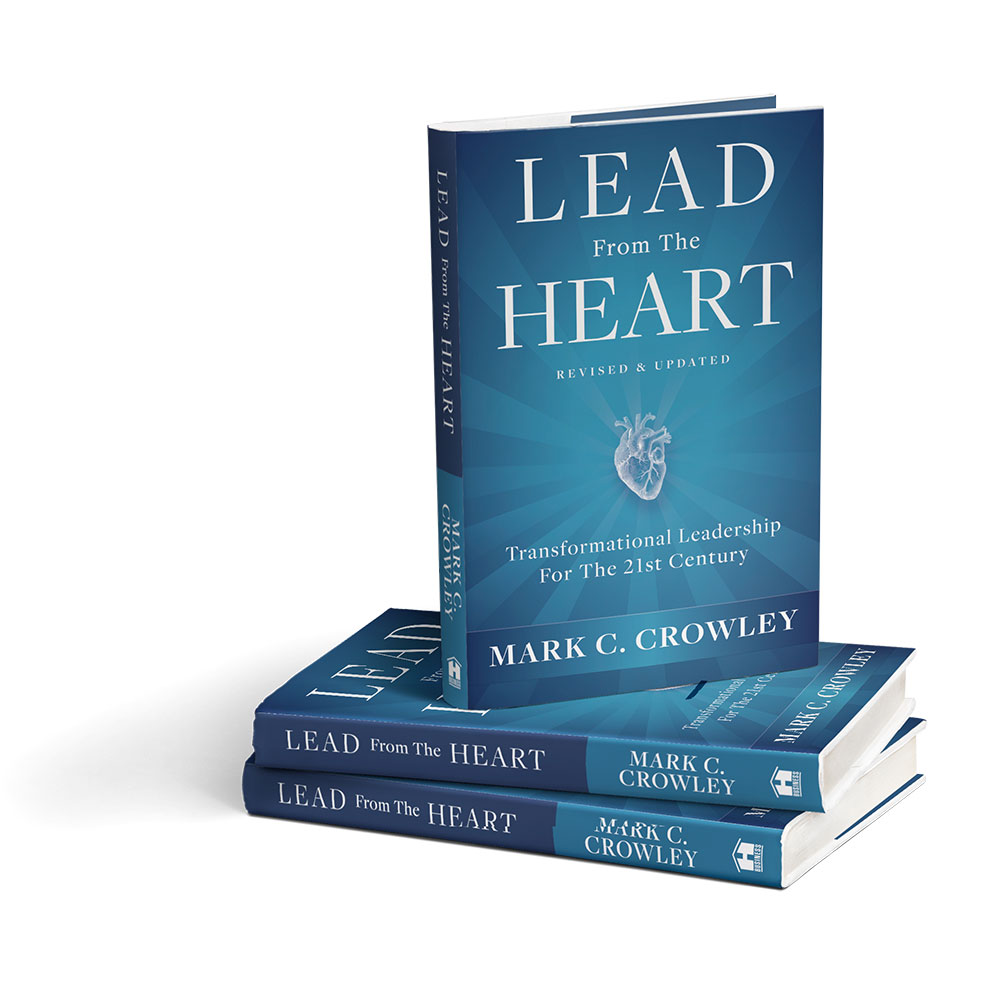 Audio Book: An audio book version of Lead From The Heart can be purchased on Audible, Apple, Google Play Audio, Audiobooks.com, and all other major audiobook platforms.

A Sampling Of Testimonials:

“This book is a testament to the wisdom of ignoring the well-meaning advice of experts who too often look backwards to formulate strategies for the future. Had Mark C. Crowley listened to an expert who told him to stop writing about the heart – about the role of emotion – in leadership, this wonderful book would not exist, and those of us who study or practice leadership would be the poorer as a result.  Engaging, searingly honest, and deeply researched, ‘Lead From The Heart’ is destined to be a classic.”

“This new, expanded and updated edition of Lead From The Heart gives us fresh, profound and compelling insights into the importance of leading from the heart, not just the head. Mark C. Crowley also shares with us very concrete, practical advice on how to do it. An indispensable companion for today’s leaders.”

~ Hubert Joly, Former Chairman And CEO Of Best Buy; Author Of The Heart Of Business

“Mark C. Crowley’s classic Lead From the Heart has already earned its spot at the top of the leadership booklist. Now his second edition offers new research, new perspectives, and new examples that will motivate a new generation of leaders to listen to that most essential of voices: the one that comes from within.”

~ G. Richard Shell, bestselling author of The Conscience Code: Lead With Your Values; Advance Your Career and the Thomas Gerrity Professor, the Wharton School of the University of Pennsylvania

“Learn the true keys to successful leadership in “Lead From The Heart!” Filled with inspiring stories, practical advice and years of tried-and-true methods, Mark C. Crowley uniquely explains how to inspire your team and practice a people-first approach to leadership. Learn From The Best – a must read!

~ Dr. Marshall Goldsmith is the Thinkers50 #1 Executive Coach and New York Times bestselling author of The Earned Life, Triggers, Mojo, and What Got You Here Won’t Get You There.

Lead From The Heart: Transformational Leadership for the 21st Century

In his thoroughly revised & updated edition of his now classic book (coming August 23, 2022), Mark C. Crowley provides the roadmap workplace leaders the world over are seeking: How to most successfully & sustainably inspire & manage other human beings in the post-pandemic era.

Over a decade ago, Mark C. Crowley was first to assert that traditional leadership practices weren’t just failing, they were doing profound harm to people. Signs were already clear that workers were neither engaged nor happy in their jobs – & that the era of working just for a paycheck had ended.

In his truly groundbreaking book, “Lead From The Heart,” he also predicted that workers would one day quit organizations if they felt their deeply human needs for feeling valued, respected, appreciated & personally cared for weren’t being consistently met. And, after people had time to deeply reflect upon their lives, careers and personal happiness during the two-year-long COVID pandemic, tens of millions of workers globally have quit. And, according to McKinsey Consulting, the number one reason people have given to explain why they resigned during the “Great Resignation” has been “not having had a caring manager.”

The truth is people have greatly evolved in what they need and want in exchange for work, & this massive change in expectations demands that managers embrace an entirely new way of leading.

In his new and virtually re-written edition, Crowley brilliantly reinforces his groundbreaking thesis that human beings are most often influenced by feelings and emotions – & that it’s the heart, not the mind, that drives human motivation & achievement.

Adding truly remarkable scientific research that has emerged since the first edition was published in 2011 – in addition to deeply moving and illustrative stories – he proves leading with an intentional balance of mind and heart has become essential.

There once was a day when the idea of bringing heart into leadership was seen as preposterous, counter-productive to a workplace manager’s success in leading a team and driving performance. On the cutting edge a decade ago, the second edition of “Lead From The Heart” provides irrefutable proof that Mark C. Crowley’s thesis hasn’t just held up, it provides the leadership solution organizations around the world are seeking to win back the hearts and minds of their workers.

In May 2020, fourteen separate Ph.D. students at the University of Massachusetts Global’s Educational Leadership Ph.D. program began research on one of the four “Lead From The Heart” practices & its impact on leadership within elementary & secondary education. As of the summer of 2022, three of these students have completed their thesis, earned their Doctorate degrees – & further confirmed the efficacy of the “Lead From The Heart” philosophy.

On Amazon.com, the first edition of “Lead From The Heart” received nearly 500 reader reviews earning an average score of over 4.8 out of 5.