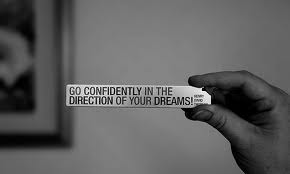 “Man often becomes what he believes himself to be.  If I keep on saying to myself that I cannot do a certain thing, it is possible that I may end by really becoming incapable of doing it.

On the contrary, if I have the belief that I can do it, I shall surely acquire the capacity to do it even if I may not have it at the beginning.”

As those of you who have read Lead From The Heart already know, throughout my entire childhood, I had the perverse experience of routinely being told I would end up a failure in life.

Through repeated and profoundly destructive interactions with my father, I was taught to believe that I fundamentally lacked.

My father’s influence, of course, had the effect of deeply undermining my self-confidence. It made me doubt my capabilities and talents, and fearfully approach most new things.

How I overcame my great deficiency in self-belief had much to do with other people who came into my life – friends, teachers and coaches – who saw things differently and made a distinct point of insisting that I actually had much to offer.  In the context of all I was hearing at home, these words of encouragement gave me far more empowering views of myself, ones that inspired me to reach, to pursue greater challenges and to overcome my feelings of inadequacy.

When I later entered business and first became a manager of people, I made a surprising observation: the far majority of employees working for me had self-defeating doubts about how talented and capable they truly were.  Many consistently underestimated their full human potential.

Guessing that few of them had anything close to the upbringing I had – and that their parents likely did all they could to build up their self-esteem – I soon came to understand that fear and doubt are a part of the human condition.

In a peculiar way, I also realized I’d been groomed to help people transcend their unfounded limitations.  I knew instinctively that if I took on the role of being my teams’ chief confidence builder, great achievements would assuredly follow. And, they did.

What I know for certain is that people have far greater potential than they often see in themselves. Leaders who not only understand this, but seek out ways to draw it out, will be the ones who will rule the world.

1.    Treat Your Employees Like Winners (Even If They’re Not Yet Winning)

As Rosabeth Moss Kanter wrote in her book, Confidence: How Winning Streaks & Losing Streaks Begin And End, “there’s a well-documented relationship between expectations and performance that’s at the heart of self-confidence.” In other words, you can elevate an entire team’s performance simply by setting the same high expectations for everyone.

In repeated studies where teachers were told their class was filled with “gifted” students (and, unbeknownst to them, all had been randomly selected), the kids’ academic performance soared.

According to Kanter, “thinking that someone is a potential high-performer encourages leaders and colleagues to look more closely at them, to invest more time and to find the positives in them.

2.    Ensure You Routinely Convey The Importance Of The Work Your Team Does

When people fully understand how their efforts affect the success of the organization – and that their work is inherently important and significant – they will stretch themselves to excel.  Deep down, every human alive wants and needs to know the job they perform matters.  Consequently, leaders who routinely take time to explain how employees individually make a difference consistently produce highly confident and motivated teams.

3.    Re-express Your Confidence When Results Aren’t There

The expression “sales beating,” as a description of a sales meeting they just attended, was coined by some poor employee whose boss panicked under the stress of underperformance and let everyone on the team have it.

We’ve all worked for managers who freaked out under pressure and unwittingly decimated the spirits of the very people whose motivation he or she desparately needed.

The test of a leader’s true character, therefore, is whether they’re capable of sustaining the self-confidence and demeanor of a winning team even when the scoreboard suggests otherwise.

When things get rough, double down on the disciplines and practices you know have led to great success in the past.  But, most importantly, make sure your team fully internalizes how much you believe in them and their abilities.  When your people are convinced you have complete confidence in them, they’ll reward that trust.

4.     Find Out What Others Are Doing To Succeed

When Jeffrie Lurie bought the Philadelphia Eagles several years ago, the football team was greatly underperforming.  Tied to an intense desire to turn the Eagles into consistent winners, he traveled to San Francisco and visited the owners of the 49’ers – a team that already had won several recent Super Bowls.

Lurie returned to Philadelphia with a long list of best practices he immediately introduced to his team.  Taking immediate action on bringing the same winner’s environment to the Eagles, the players quickly saw the positive changes and instinctively interpreted that Lurie was taking the steps that would help them start winning. And, of course, they did. (The Eagles won their division six times, and placed second three more times from 2001-2010).

If your ambition is to have a wildly productive team next year, allow the words of Rosabeth Moss Kanter to be your mantra, “Leadership is not about the leader, it is about how he or she builds the confidence of everyone else.”

We greatly appreciate it when our readers share our articles with friends and colleagues via social media!  We also invite you to join Mark’s tribe and receive all his work directly.