Display Equanimity (And Never Lick Anyone’s Sandwich) When Others Succeed. 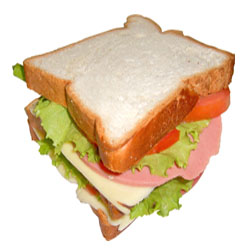 I have a twin brother and, as ten-year-old kids, we made a firm agreement: whoever made it into the TV room first got to pick which shows we watched.

More often than not, we enjoyed a lot of the same programs – Superman, the Three Stooges and Bugs Bunny cartoons. But there still were times when my getting into the den second meant I was stuck watching the Munsters – or some tedious game show – all at my brother’s insistence.

One afternoon, my brother had dibs in the room and proceeded to watch one show after another he knew I had absolutely no interest in. I sat stewing knowing he was the one in power – and quite unlikely to relinquish control.

After a couple hours of this, my brother suddenly got hungry and informed me that he was heading into the kitchen to make a sandwich and would return to watch more of his shows.

I, of course, promptly objected to his plan and reminded him that his leaving the den for even a second would make me the first one in. I told him directly that my shows were going on just as soon as he left the room.

In that moment (and perhaps all moments), my brother was much more clever than I was. He went to the doorway and laid himself on the ground. With his toes still touching the carpet in the den, he reached around into the kitchen and grabbed one of the many floor rugs my mother had placed there.

Brilliantly, he used that first rug to overlap the carpet in the den and then proceeded to build a chain of connected rugs allowing him to go fully into the kitchen, make himself a huge sandwich and, technically, remain in the den all at the same time.

In the moment, I saw my brother’s genius and knew I’d been beaten.

For the few minutes he was “gone,” I cheered myself up a bit by changing the channel and watching something I liked. But upon his triumphant return, he placed his beautifully made bologna sandwich on the table in front of me, and made a beeline to the TV.

My brother and I were generally quite competitive with each other and it killed me to be so outwitted. Perhaps because I hated losing so much, I made an instinctive decision to soften the blow of my searing loss. I licked his sandwich just before he’d made it back to the sofa.

Yes, of course, this maneuver grossed out my brother and I ended up eating the sandwich. But even as a ten-year-old, I knew what I’d just done was a really jerky reaction to his winning.

I offer this story as a reminder to always take delight in the success of others – most especially those who work for you – and to never forget the universe is abundant. There’s plenty of success and achievement to go ‘round for all of us.

Unlike my pathetic example, demonstrate your equanimity when others achieve and resist the temptation to feel another’s win is somehow your loss. In the new world order, the leaders who will be most successful will be ones who inspire cooperation, idea sharing and teamwork – all by acting out of a higher consciousness and genuinely honoring others when they excel or are given the spotlight.

Sharing these blogs is cool!  If you would like to receive them directly, please sign up here!