Drill Sergeants With Heart? How The Military Is Reinventing Its Leadership For The 21st Century 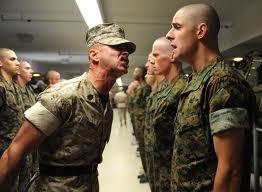 If I asked you to conjure up an image of an Army (or Navy, Marine Corp, etc.) Drill Sergeant, I’m almost certain what you conceived would match up pretty closely to the photograph on the right.

For generations, Drill Sergeants have been characterized by the intensity of their yelling, screaming, and fear inducing barking of orders.  Quick to both scold and harshly punish, that guy in the photo is no cliché.

With our minds in agreement on how Drill Sergeants have historically sought to train, motivate and even inspire their young recruits, I’d like to now tell you that things have greatly changed in the military.   Out go the feral tyrants; in come leaders with heart.  I’m deadly serious.

It was announced this past week that Army Staff Sgt. Jeffrey Heilman was named Drill Sergeant of the Year.  Out of 5,400 Drill Sergeants in the active duty ranks and Army Reserves, Heilman was intensely evaluated by the Army’s Training and Doctrine Command before being chosen.   Here are some highlights of the process:

I honestly find it stunning that it’s our military, which is leading the charge in fundamentally reinventing its approach to leadership.  It’s recognized how important it’s become for leaders to relate to soldiers as human beings noting that the ranks are filled with people from a variety of backgrounds.  It understands the world has grown far more complex.  Our lives are constantly being reshaped by technology and the military now rejects one-size-all training.  Alternatively, it now fully embraces more individualized coaching and training.

So if our military has determined that its leaders are far more effective in the 21st Century by being more human, more caring and far less fear mongering, aren’t they setting an informed example for business to follow?

We are very grateful to have you as a reader and hope you’ll return to this site each Monday for a new leadership article.  If you would like to receive Mark’s blogs directly (absolutely no strings attached, list sharing etc.), please sign up here.  Of course, we love it lots when you share these blogs with friends via social media!