The Incredible Effects Of Your Handshake 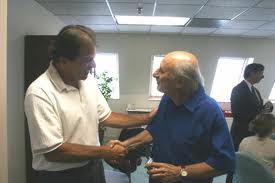 “Touch seems to be as essential as sunshine.”

If I died tomorrow and could leave society my most valuable insight into 21st Century leadership effectiveness it would have to be this:  Always remember the people you manage are first and foremost human beings.

The big winners in this new era will be leaders who create a sense of well being in people – resulting in happier, much more engaged and productive employees.

In Lead From The Heart and many previous blogs, I’ve detailed the leadership practices which have the most positive effects on people and therefore on work achievements.  These include building a more personal relationship with employees, proactively developing them, and routinely honoring their achievements.

According to UC Berkeley Psychology Professor, Dacher Keltner, we have an entirely new practice to add to the list – touching.

(If you’re feeling skeptical at this moment, suspend your disbelief  and read on).

In his book, Born To Be Good: The Science of a Meaningful Life, Keltner reveals that “touch triggers biochemical reactions in the recipient which promotes trust, cooperation and goodwill between individuals.”  He cleverly emphasized, “touching and trusting go hand in hand. ”  (So it’s not a coincidence that greeting rituals around the world involve touch).

According to Keltner, pats on the back, handshakes and fist bumps are subconsciously noticed altering another’s nervous system.  Stress and anxiety are released; recipients feel rewarded, encouraged and more cooperative.

We know the word “encouragement” means “to give heart.”  “To touch,” Michelangelo said, is “to give life.”

Keltner says it’s a fundamental human need to be touched (we get massages, manicures and pedicures to help fill that need) yet some cultures now go out of their way to avoid contact with others.

In a recent study of the frequency of touch, University of Florida psychologists observed two people in conversation over a cup of coffee in cafes around the world.  In San Juan, Puerto Rico, 180 touches were observed.  In Paris, it was an average of 110.  In Florida, it was 2.  And in London, not a single touch was observed.

Remembering that employees are human beings – take this research to heart and put it into action.  Build greater trust and connection by being totally present when you shake hands with people.  Literally pat people on the back.  And give a hug if you feel comfortable.

Leading from the heart means it’s often the subtle, and deeply human, things and gestures that have the most profound effect on people – and on their performance.

We appreciate it when you share these posts with friends and colleagues and encourage you to receive them directly.  Please sign up here.