What My Near-Death Experience Taught Me About Life And Leadership 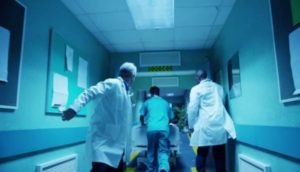 Early one morning just a few weeks ago, I woke up with the intention of starting my day at the gym.  But before I ever made it out of the house, I completely blacked out, fell on a cold travertine floor and broke my ribs.

The pain from that fall was excruciating; and it immediately restored me to consciousness.  But the sheer terror of the moment instantly grew worse; I thought I was suffocating.

Hearing my moans, my wife found me splayed on the ground and largely incoherent.  Stunned and petrified, she kept asking me what had happened. But by this point, indescribable fear had set in, and all I could do was cry the words, “I can’t breathe. I can’t breathe!”

Despite my grave condition, I resisted my wife’s pleas to call an ambulance.  In disbelief over my characteristic male stubbornness, she figured out a way to get me in the car and transported to the emergency room at Scripps Clinic, La Jolla. And this is when a team of brilliant doctors and nurses mobilized with the purpose of saving my life.

I could immediately see in my doctor’s face that he was highly alarmed by my condition.  Consistently – as he hurriedly worked to check my vital signs and make a diagnosis – he took time to scold me for not calling 911.

Even in my diminished state, it was obvious to me that every nurse on this triage team had a unique role to play.  As if I was watching a movie of someone else’s experience and not my own, I marveled at how brilliantly orchestrated everything was.

But a sobering reality instantly set in when my doctor told me he was rushing me into the operating room and that I’d be going under anesthesia.  It was at this moment that a nurse called my name.  Looking me straight in the eye, she pierced me with the words, “You’re going to be alright, Mark.  We’re all going to make sure of it.”

Hours later, when I came out of sedation, I learned that my left lung had collapsed in the fall, and that my heart had endured tremendous stress.  But far more disconcerting to my doctors was their discovery of a “pulmonary embolism,” a blood clot in my lungs similar to the one that recently took the life of PBS radio anchor, Craig Windham.

When I was told I was being moved into the Intensive Care Unit, only then did I fully acknowledge that my life was indeed in great danger.  I found out later that it was at this same time when nurses asked my wife if I had signed a Do-Not-Resuscitate Order.

But here’s the truth.  From that moment on, I never really feared for my life.  And it wasn’t because I was inordinately brave – or even exceptionally delusional.  My conviction that I’d fully recover had everything to do with how my doctors and nurses treated me – how they made me feel.

I spent an entire week in the ICU and, from the minute I arrived, my treatment was characterized by truly exceptional kindness, thoughtfulness, empathy and compassion.  It was demonstrated to me in so many small but noticeable ways that it inevitably came to overwhelm me.  Very intentionally, these highly committed caregivers found ways of connecting to the deepest part of my humanity – and of directly conveying to me that my healing mattered to each of them personally.  Yes, the medical care was state-of-the-art and brilliantly executed.  But after reflecting on all that occurred, I’m convinced that it was this consistent drip of caring interactions that most influenced my rapid recovery.

Empathy: Highly Beneficial In Medicine, But Fatal In Leadership?

In our traditional workplaces, we’ve never been keen on having managers intentionally display the kinds of humane behavior I experienced in the ICU. More to the point, we long ago concluded that expressions of compassion and empathy are the hallmarks of weak leaders – people who do not drive high performance.

But mounds of scientific research are now emerging to fully refute this.  What’s being discovered is that the qualities my doctors and nurses so consistently used to motivate my healing are no less profound in their impact on leadership success.

In what struck me as an incredible display of serendipity, the first book I picked up to read during my home recuperation was “The Happiness Track: How To Apply The Science Of Happiness To Accelerate Your Success.  Written by Emma Seppala, Science Director at Stanford University’s Center For Compassion & Altruism Research, the book is a brilliant distillation of research which proves that qualities like kindness, concern and empathy are actually human strengths – not weaknesses.

Based on data Seppala provided in her book, along with additional insights she shared with me personally in a recent meeting, here are three of the top reasons why leaders who display more of their own humanness – and are authentically sensitive to the human needs of their employees – will find uncommon success in our 21st Century workplaces.

Humans Are Actually Hard-Wired To Be Empathetic

“If you look at the research,” Seppala told me, “the motivation to help others succeed ensured our entire human species survived.  People think Darwin said ‘survival of the fittest,’ but Social Darwinists with an agenda co-opted that expression to justify a racial and social hierarchy.  What Darwin really believed was that sympathy was our greatest human trait.  That’s what truly ensured our survival over the long run.  And so compassion may strike some people as being a soft topic – one that belongs in religious or spiritual discussions – but actually it’s fundamental to who we are.”

Interestingly, nature seems to reward compassionate behavior.  Studies prove that people who are characteristically empathetic, and concerned about the well being of others, routinely have greater psychological and physical health – even longevity.

A theory of success that’s deeply embedded in our culture is the idea that we must always “look out for number one” so as to not get run over by the competition.

But research now shows that being self-focused more typically undermines personal effectiveness.  Inevitably, selfish people – as well as self-interested leaders – lose the trust of others, cause great harm to their relationships and drive many people away.

“Being compassionate, however, is the reverse of self-focus,” Seppala told me.  “It involves a sensitivity to the suffering of others and a desire to help them in a non-judgmental way.  And displaying that kind of empathetic behavior toward other people leads to positive results that are backed by science.”

When people frequently experience feelings of joy, interest, kindness and appreciation, for example, they learn more quickly, bounce back more easily from stress, connect more deeply with other people – and are far more engaged and productive in their jobs.  Tied to this understanding, workplace leaders are wise to do all they can to ensure their people are made to feel valued, respected, cared for – even nurtured – in their day-to-day work lives.

But unfortunately, says Seppala, “the real-life experience most people have at work not only deprives them from feeling many of these emotions, it too often leaves them feeling excessively stressed, under-appreciated and with a highly compromised sense of well-being.  More than anything, this is why 7-in-10 people today are not fully engaged, and it’s also why fifty-percent of people across all industries today are burned out.”

When I asked Seppala if she agreed that it’s time workplace leaders begin to apply Fredrickson’s research to how they manage people, she was adamant.

“We keep on giving people material perks and bigger bonuses just to keep them in the game.  And yet if you look at what really drives human loyalty, it’s not money.  It’s the happiness that comes with having positive interactions with their co-workers and bosses.  And so, what we need today are leaders who care, leaders who know their people and who personalize their relationships with them.  We are first and foremost human beings who need a human touch.  Right now, we’re not putting that into workplace management even though people spend record hours there.”

In reviewing the first draft of this article, a close friend of mine asked me for clarification. “How that hospital staff made you feel during your crisis clearly impacted your attitude – and even the faith you had in your recovery,” she said. “But do you really believe their displays of empathy, kindness and compassion were the main reason you’re still alive?”

I’m certain of it.  The emergency room doctor who intentionally chided me, the nurse who assured me I’d be alright, the pulmonary surgeon who literally ran me into surgery – all of the ICU staff who closely monitored me through the first few vulnerable nights – each of them demonstrated to me that I personally mattered – and reconfirmed this invaluable truth:

How we make other people feel is the source of our greatest leadership influence.

Coincidentally, a recent Harvard Business Review article warns leaders against being empathetic saying that the process inevitably proves to be “exhausting” and “emotionally draining.”  But the article’s author uses these terms to describe an excessive use of empathy – something virtually unseen in the real world.

The fact of the matter is that most displays of kindness and care require nominal time and effort.  And as I can personally attest: a little goes a very long way.