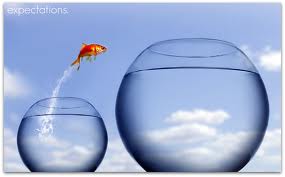 Occasionally when I’m writing my blog posts, I feel compelled to re-state what may not always be obvious: the idea of Leading From The Heart is anything but a touchy-feely leadership approach.

Instead, the premise is this:  If you are extremely vigilant in selecting the most talented and ideally suited employees, understand and fully support their career and growth ambitions, and routinely honor their efforts and achievements – you will have a highly motivated and capable team on your hands.

Even better, you will have a team of people who are collectively capable of accomplishing extraordinary things.  So when you Lead From The Heart, you inherently prepare your team to aim very high with respect to the goals and expectations you set.

Several years ago when I was a Retail Banking Regional Manager overseeing 26 bank branches, our company used a modified profit and loss statement to measure branch effectiveness. Branches earned revenue for the products they sold (e.g. loans, checking accounts etc.) and were charged for their payroll.  “Net profit” was the bottom-line measure.

One November, the bank informed Regional Managers that the coming year’s monthly net profit goal would be $10,000.  This was a target many branches would struggle to meet.

In December, I took my management team on a retreat and announced the New Year’s target of $10,000 while insisting that we should aim higher.  Now, no one ever wants their goals raised beyond what their company sets for them, but I appealed to my team’s skill and motivation in challenging them to shoot for $14,000 – 40% beyond what the rest of the company was targeting!

I asked them to return to their branches and build a plan (that I would review and approve) that would get each of their teams to at least $14,000 in monthly profit.

To be honest, some of the managers bristled at my higher ambitions.  But every one of them soon returned with a plan – that they believed was achievable – which would result in meeting the higher target.  Several of them told me that once they played with the numbers and saw what it would take to hit $14,000, their own beliefs of what was achievable changed.

Keeping in mind that the managers benefited through pay and other rewards for their higher-than-average performance, they were ecstatic when January’s regional net income average exceeded $17,000.  Comparatively, the company average that month came in well under the $10,000 target.

As the year went on, many of the managers raised their own expectations of themselves and of their own teams, and set increasingly higher goals.  Some branches soon were hitting $20,000 in net profit on a monthly basis – and this region went on to lead the entire bank of nearly 4,000 branches for the next three consecutive years.

I wrote extensively about this team in Lead From The Heart and my experience with them taught me this:

When I cared deeply about them, found every way possible to foster their growth and development and routinely expressed genuine gratitude for the work they did, extraordinary performance was my reward as their leader.

The Lead From The Heart bottom-line: When you as the leader believe in and follow through on the things that help your employees thrive, they will naturally and instinctively excel.