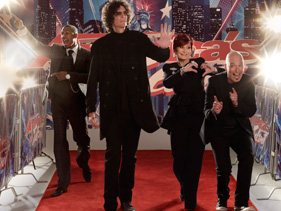 “Not every contestant can be wonderful.” “You’ve got to be up front with people.”
Howard Stern

Until now, I’d never imagined writing a blog about radio’s shock jock, Howard Stern; nor did I ever expect we all might learn an important leadership lesson from him.

But Stern’s recent behavior while judging a TV talent competition offers a truly compelling example of effective leadership and, dare I say, of leading from the heart.

And because Stern typically speaks his mind in a most unvarnished manner, many media pundits have predicted he will be an especially harsh new judge on America’s Got Talent.  Think Simon Cowell on steroids.

In the first show of the season, Stern is almost immediately put to the test.  A seven-year-old rap singer is one of the earliest performers and, let’s just say, he’s not yet all that good.

Stern isn’t quick to react, but inevitably decides he’s heard enough.  He pushes the “X” button in front of him which effectively ends the youngster’s hopes and dreams of going on further on the show.   Not surprisingly, the little guy is crushed by his unexpected dismissal and immediately begins to cry.

It’s in this moment that Stern defies his critics.  Instinctively, and without saying a word, he walks up on stage, gives the boy a hug, and calms him down.

I’ll come back to Stern’s act of admirable compassion in a moment.

Last Wednesday night, I tuned in to see the final four singers perform on American Idol.   At this point in the competition, of course, each of the remaining contestants is very, very good.  Nonetheless, one person will be given the heave-ho until a champion is crowned and only a slight singing imperfection in these final weeks likely will be the reason someone gets booted.

Noting that all three Idol judges, Steven Tyler, Jennifer Lopez and Randy Jackson, are highly experienced music industry experts, I fully expected them to parse out the differences among the four finalists and to help the voting audience discern which three performing artists deserved to survive another week.

But none of them really did.  While one singer truly bombed on one song — and the judges let her know it — generally, all four singers were lauded with what appeared to be equivalent praise.  In my opinion, the judges failed to do their job.

We have it in our minds that criticism stings and, as leaders, this makes us reluctant to give much of it.  But we’re missing a wonderful opportunity to help someone grow and to become more every time we avoid calling out a legitimate performance limitation.

It’s been my personal experience that leaders who identified my shortcomings did me an enormous favor.  Like you and most human beings alive, I’m a sensitive person who winces when my work is less favorably judged.  I honestly can’t say I’ve ever enjoyed hearing my boss tell me I could do better.  But knowing where to give one’s attention is the fastest route to self-improvement and mastery.

When my son was a high school freshman, he had an important paper to write – one which would have great weight in his final class grade.  After taking his first stab at the report, he asked me to review it for him.   It wasn’t good enough to submit and I told him directly.  But I also assured him I would help him write the best paper of his life if he would let me coach him.

It might surprise you that he re-worked that paper at least a dozen times before he turned it in.  Yes, he was exasperated by all the additional work, and I’m most certain he believed in the moment that I was setting the bar way too high.

But when he got the paper back, he learned the truth.  His teacher gave him an “A” and specifically told him that his quality of work wasn’t just what she expected, but also required in order to excel.  He learned a valuable lesson about life.

Here’s what I admire about Howard Stern and what I hope you’ll take away from all this.  Once he determined the young singer’s performance wasn’t yet at the level it needed to be, he chose to be very direct and honest.  But by demonstrating that he genuinely cared about the boy and his feelings, he left the kid’s spirit in tact.   Consequently, don’t be surprised to see this little guy back on the show next year – singing better than ever.    And he’ll have Howard Stern of all people to thank.

We’re very grateful when you share these blogs with others via social media and invite you to also to receive them directly by enrolling here.