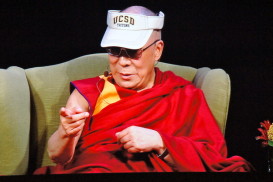 His Holiness, the 14th Dalai Lama, spoke at my alma mater, the University of California, San Diego last week, and it was an honor and great privilege for me to attend.

Noting that the Dalai Lama is one of our world’s most influential leaders (albeit spiritual and not in business), I paid particular attention to his word choice, the beliefs he expressed and, most especially, to his actions.  My hope was that I would observe some compelling and unique leadership practices that I could later pass on to you.

As you might imagine, the Buddhist monk and 1989 Nobel Peace Prize winner, did not disappoint.

The Dalai Lama came to UCSD specifically to speak about global climate change and was joined on stage by two of the world’s foremost subject experts, Dr. V. Ramanathan and Dr. Richard Somerville.

Both scientists are distinguished professors at the Scripps Institution of Oceanography.  Ramanathan discovered the “Greenhouse Effect” three decades ago, and Somerville was the lead author of a climate change paper that shared the 2007 Nobel Prize equally with former Vice President, Al Gore.

Before the Dalai Lama spoke a single word, each researcher took a few minutes to summarize what’s now known about the effects of coal and fossil fuel burning.  We learned that carbon dioxide and other heat-trapping gasses are indeed warming the earth’s temperatures, raising sea levels and melting glaciers (80% of the Himalayan icecaps are now gone).  Both experts were emphatic that action is needed now and, within twenty years, the effects of man-made pollution will be irreversible if left unaddressed.

Noting that half of Americans remain unconvinced that this problem is real, Dr. Somerville concluded, “Everyone is entitled to their opinions, but not when it comes to the facts.”

With this as a background, let me now share four of the most impressive things the Dalai Lama did to powerfully influence his audience and demonstrate his mastery of interpersonal leadership.

1.    Instead of seeking the spotlight for himself, he gave it to the people who did all the work.  When the Dalai Lama began speaking, he had no notes prepared.  Instead, looking at the two scientists as they concluded, he said, “Well done. I agree exactly.”  Selflessly, he gave all the credit to Ramanthan and Somerville, and then used his position to move their work and conclusions forward.  It also was quite impressive that the Dalai Lama allowed the scientists to speak first.  A common problem in leadership today is that managers feel they need to compete with the very people they’re supposed to be supporting.  The Dalai Lama sets a better, more self-assured and inspiring model.

2.    He respects and encourages other people’s points of view. Acknowledging that many people in society rail against the idea of global warming, the Dalai Lama specifically told his audience that we must never demonize people when we disagree with their beliefs.  “Argument is okay. Serious debate is okay.  But our mental attitude toward people with different beliefs has to be respect.”  He reminded us that there are 6 billion people on the planet, each with their own perspective.  He therefore warned us to “avoid feeling your view is ever 100% right.”  Great advice in life and in business.

3.    He conveys optimism and hope.  The Dalai Lama was emphatic that “the environmental problem is very serious and the scientific data is very convincing.”  But rather than be critical of all that created the dilemma – or even the obstruction some have caused in addressing it – he maturely laid out a vision for how we all can resolve it.  “It’s far better to remain optimistic,” he advised us. “Optimism encourages people to work for a better life and a better world.”  The lesson to be learned is that fear is the most destructive motivator of human performance.  We must always choose to inspire the people whom we lead, especially when our backs are against the wall.

4.    He treats everyone with care and concern.  When the event was over, the seventy-six-year-old Dalai Lama took time to express his gratitude to the security guards, the doormen, and the ushers.  By doing this, he demonstrated that everyone around him was important; the work every person did mattered.  “When we treat each other as equals,” he earlier explained, “we actually do ourselves a favor.  Compassionate people experience less stress, enjoy lower blood pressure and are able to think more clearly.”   If you can imagine how those workers felt when being personally acknowledged by the Dalai Lama, you inherently know how your own employees feel when you take time to honor them.  The words, “thank you” are also two of the most powerful ones in our language.  They go right to the heart.

We appreciate your reading this blog very much and hope you’ll share it with friends.  If you would like to receive Mark’s articles directly (absolutely no strings attached, data sharing or first born child required), please sign up here.