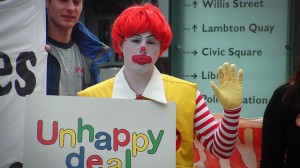 Note: This article was first published by Fast Company Magazine on April 30th, 2012.  It was the most read story on their website for the next entire week. http://bit.ly/I8j98C

A friend of mine resigned his long-time bank management job this week to take early retirement. I learned about it on Facebook.

As I began reading his announcement, I fully expected it to be an animated recounting of all the new hobbies he planned to pursue and exotic trips he intended to take. But it quickly became clear that this was no ordinary farewell note. He was truly upset about ending his career prematurely and wanted everyone close to him to understand why.

It was painful to discover that my former colleague had grown profoundly disheartened by the way his organization’s leadership had been treating him. With over two decades of service behind him, he called it quits simply because he couldn’t take it anymore.

“I felt like no one cared about me as a person there, and finally decided to extricate myself from the grind. I know many of you feel the same way now in your jobs…trapped and unappreciated.”

There was a sense of relief in his words, as if I was reading about someone who had been imprisoned, found an escape route, and wanted to show others the way to freedom.

“You may not be able to retire quite yet like me, but please do yourself a favor and look for something more satisfying. It might take a while (it took me eight months once I made the decision), but it’s been so worth it. If you’re old like me, then think about early retirement. If you’re young, look for a more satisfying, fulfilling career path. Don’t let these companies drain off your sense of worth, pride, health, energy, honesty and ethics. Are you listening [XYZ Bank]*? Of course you’re not.”

I share his words as another illustration that our common approach to workplace leadership is failing. And experts have been trying to tell us this for years.

New York’s Conference Board, a century-old research firm, began studying employee satisfaction and engagement 25 years ago. Their work shows that worker happiness has fallen every year since–in good economic times and bad. Today, over half of American workers effectively hate their jobs.

But it’s the past four years that have brought employee discontent to new and highly charged levels.

“People were already unhappy, but the recession years have made things much worse,” says John Gibbons, formerly of the Conference Board and now Vice President of Research and Development at the Institute For Corporate Productivity. “Whether we realize it or not, workers have been under constant duress. Because of scarce resources, few opportunities for development and promotions–not to mention the fact that people often have been required to do the work of more than one person–a lot of our workforce is burnt out. Employees across the country feel overworked, under-rewarded and greatly unappreciated.”

The recession has been hard on managers too, no doubt. Delivering great customer service, and achieving KPIs and revenue goals all have been a tremendous challenge during this extended period of limited means.

But it’s clear that many leaders have lost sight of what matters most to people at work. Appreciation. Support. Recognition. Respect. And when people feel disillusioned and virtually convinced things have to be better somewhere else, they do what my friend did. They quit.

According to the U.S. Labor Department, 2.1 million people resigned their jobs in February, the most in any month since the start of the Great Recession.

Dating back to mid-2011, numerous studies have reported that at least one-third of the American workforce planned to jump ship in 2012. Since very little action has yet to be taken on that threat, however, those predictions have come to be seen only as “Chicken Little exaggerations.” Business leaders, therefore, have grown less concerned.

Simply because 2.1 million people were able to find new jobs, February’s mass exodus may prove to be the watershed moment when turnover becomes the problem it was predicted to be.

However, there still may be time for managers to re-recruit their employees before they leave. This won’t be easy and it will most definitely require a significant change in leadership practices. Here are three things leaders should learn quickly and never forget:

1. What makes people happiest in their jobs is all profoundly personal. “Do I work for an organization whose mission and methods I respect?” “Does my boss authentically advocate for me?” “Is the work I do meaningful?” “Am I afforded sufficient variety in my day?” “Do I feel valued and appreciated for all the work that I do?”

We know that all these matter more to people than their compensation–and workers generally don’t quit jobs when these basic needs are met. According to a worldwide Towers Watson study, the single highest driver of employee engagement is whether or not workers feel their managers are genuinely interested in their well-being. Today, only 40% of workers believe that.

2. People only thrive when they feel recognized and appreciated. In a recent Harvard Business Review article, “Why Appreciation Matters So Much,” Tony Schwartz reminds us that all employees need to be praised, honored, and routinely acknowledged for their efforts and achievements. Consequently, leaders must allow themselves to manage more from their hearts.

Our brains are great at building strategies, managing capital, and analyzing data. But it’s the heart that connects us as human beings, and its what’s greatly lacking in American leadership today. This is what now must change.

3. Your employees will stay if you tell them directly you need them, care about them, and sincerely plan to support them. Any time someone quits a job for a reason other than money, they’re leaving in hope that things will be better somewhere else. So, everyone who works for you must be made to feel that they matter. Plan one-on-one meetings and re-discover the dreams each person has at work. Tell people directly how valuable they are to you. To be successful, all your future behavior must demonstrate to your employees that their best career move is to remain working for you.

Being human and treating one another with dignity and respect is something the heart already knows to do. Leaders would all do well to follow it.

*His former employer, one of the U.S.’s largest financial institutions.

We love it when you share these blogs with friends, family and colleagues!  If you would like to receive these directly (no strings attached!), please sign up here.