How To Win Your Boss’s Admiration, Right After A Blown Assignment 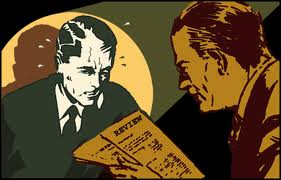 There is something in humility which strangely exalts the heart.
Saint Augustine

A good friend of mine, Colin, recently participated in a workshop facilitated by an outside consultant.

The impromptu session was scheduled with great urgency.  Colin’s firm suddenly lost several big accounts and was concerned more defections were possible.  Consequently, Colin’s boss decided it had become crucial to have four of his key executives professionally coached on client retention strategies.

Colin and the other three managers learned about the clinic just two days before it was scheduled.  Each received a packet of information that included a pre-work assignment.

Colin specifically learned that he and a colleague, Erin, would be making a joint presentation.  Using data they were given about a fictitious client relationship, their job was to persuade a group of key decision makers (i.e. the consultant, Colin’s manager and his boss), to renew their relationship with the firm.

Colin and Erin had given many client presentations before, but nevertheless, chose to take the task very seriously.   Understanding the importance of the training to their boss and to their organization, they pushed other work aside, set up meetings to plan out their roles, and then spent several hours rehearsing.

Going first, before two other managers were to present, Colin and Erin built a compelling and elegant case.  They easily persuaded the mock clients to stay put.  Seeing how well they complimented each other as they spoke, and noting how thoroughly prepared they both were, the consultant immediately decreed the firm was in great hands any time these two were on the hot seat with an “at-risk” relationship.

Things didn’t go quite as well for the next pair to speak, Anthony and Elaine.

Ordinarily, Colin and Elaine would have been a really tough act to follow.  But these two made matters far worse tied to their own performance.  Neither had bothered to prepare.

A long-time employee of the firm, Anthony, came to the session expecting that his standard client presentation would suffice – and he gave it.  Ignoring the performance he’d just seen given by his peers, his inclination was to wing it and to go solo.  Glaringly missing, of course, was any of collaborative interaction with Elaine.  Even worse, he seldom remembered to reference any of the customer-specific information they’d all been directed to include.

From the perspective of the consultant and bosses who formally judged them, the effort was an unequivocal failure.  “You did nothing to demonstrate that you really cared about us and our relationship,” they were told.  “It’s clear you gave no forethought to what you would say, nor to personalizing your remarks. Were this a real client, it’s almost certain that their next move would have been to fire our firm.”

Entirely contrary to how I’m about to advise you on how best to respond when you botch a boss’s assignment, Anthony went on the defensive. He petulantly confronted the consultant and argued that he didn’t deserve to be critiqued in a training session.  Next, he deflected his own lack of preparation by disparaging the extra effort his colleagues had given.  Within seconds of blowing his presentation, he’d managed to alienate every person in the room.

As a true confession, when I first heard this story, I identified immediately with Anthony – jerk that he was.  That’s because I remember times earlier in my career when I blew a work assignment, got called out for it, and chose to respond in really immature way.

After ill-advisedly making this same mistake a more times than I care to admit, I finally came to understand that a more character-enriched response not only could minimize the damage of a workplace blunder, it actually could earn me some admiration.

If I were able to coach Anthony on how he much more effectively could have responded to his well-deserved criticism (insight for the inevitable next time), I’d urge him to follow these three steps:

Anthony’s higher self had to have known he bombed on the task and that his bosses were disappointed.  A brilliant move, therefore, would have been to call the penalty on himself.  Had he immediately acknowledged that he misunderstood the assignment, wasn’t fully prepared and was sorry everyone’s time was wasted, he would have been seen a fully human – and honest.  If I were his boss, I’d still be upset with his performance, but I wouldn’t think much about it the next day.

Everyone makes mistakes.  Try as we may, there’s an inevitability that something we do won’t turn out as expected, and we’ll hear about it from our boss.  When this happens, remember your human aspect and just listen to the feedback.  Having our work criticized almost always hurts.  But when you fight back, the lashing tends to last much longer.  Remember the words of Werner Erhard, “What you resist, persists.”

Once you’ve heard the feedback, communicate that you take full responsibility and promise to learn from it.  These two things, really, are what bosses most want to hear anyway.  So, whenever you screw up, be prepared to express some form of “mea culpa,” and to say those words sincerely.

Next time you’re performance is under the scrutiny of an upset boss, remember that how you choose to respond says even more about you than the work error you made.   And one more thing, make sure to truly learn from the experience and to never make the same mistake twice.

We’re always grateful when you share these blogs with friends, and invite you to join Mark’s tribe if you’d like to receive them directly.  Until next time!