How Washington Mutual Lost Its Heart 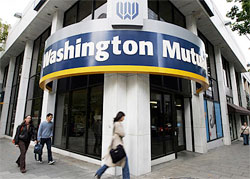 Note: This blog post was first published in the Editorial section of The Seattle Times on Sunday, September 25th, 2010

WaMu survived the Great Depression and a crisis that wiped out a quarter of all US thrifts in the 1990’s. It became a national brand.

With such endurance behind it, how is it possible this once stalwart institution ended up as the largest bank failure in American history? Within the answer to that question are important lessons for leaders about building and maintaining successful organizations.

Its spectacular collapse has been reported to be the result of extraordinary loan losses followed by a massive run on deposits. What really killed WaMu, however, was a change in the company’s century-old culture and values – a misguided move that marginalized its historic regard and care for employees and customers in the interest of driving an ever-expanding bottom line for shareholders.

Washington Mutual had been “a friend of the family.” And employees felt they were part of a family. A former senior executive told me his co-workers sent so many care packages when he served in Vietnam he couldn’t wait to return to WaMu.

In the late-90’s, the bank launched an aggressive period of national expansion. By 2003, WaMu’s ranks swelled to nearly 50,000 employees.

To preserve the culture that boasted a century of success, Killinger decided to reintroduce the bank’s five enduring values (Fair, Caring, Human, Dynamic and Driven). At “brand rallies” held across the country, employees were immersed in everything WaMu. They learned that the first three values were the foundation of our culture and the final two made us competitive and successful. However, we only “lived our brand” when all five were in balance.

The brand rallies took place until mid-2003. In 2004, WaMu suffered a significant financial loss. Convinced the bank had grown too large for Killinger to run alone, the Board of Directors named Steve Rotella as President and Chief Operating Officer.

Rotella acted quickly. He believed certain high-ranking executives needed to be replaced in order to succeed at a national level. He also openly disregarded the first three values. Making an all-too-common error about what kind of corporate culture drives the greatest and most sustainable productivity and profit (and what could have restored the firm to high achievement), he asserted that too much emphasis had been placed on being “fair, caring and human,” and nowhere near enough on “dynamic and driven.”

Not fully appreciating the fine balance with which WaMu’s values had been so purposely created, Rotella’s direction had immediate consequences: employees concluded they no longer mattered and that he had effectively declared “sales at any cost.” Tied to Wall Street’s pressure to produce profits, Killinger acquiesced.

And so the fall began.

A senior-level employee relations manager told me, “Employees rarely depart for more money. They leave because they believe the company they work for has lost its heart.” In confirmation, exiting workers routinely told Human Resources “My manager doesn’t care, you don’t care and the company doesn’t care.”

While it might be appropriate to blame Rotella and Killinger for destroying the bank’s legacy of success, WaMu was in no way unique in choosing to rip the heart out of its culture. The bank is just another example of how we collectively seek to motivate human performance in the American workplace.

According to a 22-year ongoing study, 55% of all American workers hate their jobs. They’ve made it very clear that all they want is to feel valued, appreciated and cared for – to work for a company they respect, and to feel their contributions matter.

Ironically, WaMu’s five values offer us a blueprint for effectively managing people in the 21st century. When organizations begin by being fair, caring and human, they create a foundation for employees to thrive. And when human beings feel esteemed and supported, they very naturally and instinctively repay that care with extraordinary commitment and productivity – by being dynamic and driven.

Some companies already know this. Seattle-based REI, Starbucks and Nordstrom are among them. Howard Schultz is a great local example of a man who insisted that his company’s original values must be the foundation for growth and success.

These companies are listed as great places to work. They boast extremely low employee turnover and high engagement. That all of them are flourishing is precisely the point. In fact, Wharton Finance Professor Alex Edmans recently proved that when compared to their peers, American companies that authentically value and care for employees provide investors consistently and substantially higher returns.

While the fallout from WaMu’s massive failure continues to ripple across the country, and most dramatically in Seattle, the lesson leaders hopefully will learn, before they fail, is that successful leadership requires a balance…between our minds – and our hearts.

Please forward these posts on to friends!  If you would like to receive them directly, please sign up here!