We all know the primary reason companies go into business is to make money.

But is it possible for organizations to thrive financially while also doing good in the world?

USC Marshall School of Business Professor Emeritus, Jim O’Toole spent ten years researching companies that were founded with the uncommon ambition of driving profits – while also caring about the well-being of employees, customers & communities. This podcast is devoted to exploring all of the leadership lessons O’Toole acquired from his research.

In his new book, “The Enlightened Capitalists: Cautionary Tales of Business Pioneers Who Tried To Do Well By Being Good,” O’Toole tells the remarkable stories of well-known companies like Hersheys, Lever Brothers, Johnson & Johnson, Levi Strauss, Herman Miller, & Southwest Airlines. All had founders who took the road less traveled by seeking to enrich not just shareholders – but also their workers (& society overall) – tied to the belief that their businesses would perform better by doing so.

What O’Toole discovered is that all of these company’s founders had the “moral courage” to operate a business by an entirely different set of rules. And almost from the beginning, virtually all of them were met with intense criticism and resistance from shareholders, competitors – even from some of their very own managers.

That all these organizations survive decades or even a century later is testimony to the profound visions of their original leaders.  But as O’Toole found, after each founder passed away, the successor CEO almost always gutted the original culture, and dismissed the very values that had helped make their companies so successful. 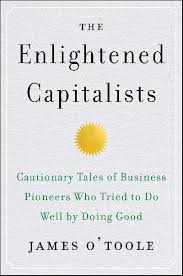 In this podcast, we discuss the reasons why so many leaders – then and to this day – so willingly dismiss the example of leaders like Milton Hershey, James Cash Penney and Herb Kelleher who irrefutably proved that leaders can create organizations that are good for both people and profits.

At the end of the podcast, I asked Professor O’Toole if, tied to everything he’d learned from researching the Enlightened Capitalists, whether putting people first is the leadership model of the future.  His answer provides invaluable insight for any entrepreneur, manager or leader who seeks to excel in the 21stCentury.