Re-engage Your Team Before Anyone Leaves 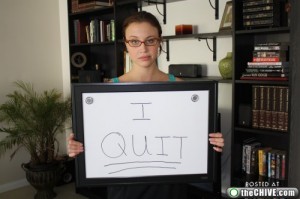 It came as a shock to me one day when one of my best employees, Sarah, came in to my office and resigned.

I guess it was such a surprise because she had worked for me for nearly five years and I had relaxed into a belief that she would somehow always be on my team.  Stupid me.

Like any bad outcome, we learn from experiences like this.  I remained friends with Sarah after she’d moved on to another organization and she later confided that she had been actively recruited away.  But what made this information really sting was in learning she probably wouldn’t have entertained the offer had she felt I really valued her.

The truth is I did value her – greatly.   And I needed her!   But in the complacent belief that after 5 years together she’d likely always be on my team, I stopped consistently demonstrating her value in our interactions.   Feeling neglected, she became open to what another employer had to offer.  And then she left.

The experience taught me that as leader we need to continually be in the recruiting process.  By this I don’t mean that we should only be seeking new talented candidates. I mean we need to routinely ensure the employees we’ve already recruited remain consistently happy and feel entirely supported.

Leaders across America are in store for some serious comeuppance for neglecting the hearts and feelings of their employees.

This spring, USA Today reported that more than one in every three workers hopes to find a new job in 2011.  With jobs so scarce over the past few years in a poor economy, people were forced to put up with bosses who did little to foster their career growth and found little time to express their gratitude for enduring heavier workloads.

The economy isn’t yet recovered, but before it becomes too late, I urge you to reach out to your employees.  If you’ve neglected them, admit it.  (To understand the value of this one gesture, ask yourself how many of your own bosses ever had the guts to do this).   Then, assure them you intend to make amends.  Start by asking what you can do to help them to progress in their career and how you can help make their work more rewarding.

If you’ve been an inherently selfish and imposing boss, you’ll probably still lose them to another pursuer.  But if you’ve just been a jerk some of the time, you might still keep your team in tact.  Say you’re sorry and make sure the changes you make from this point forward are for keeps!

Sharing these posts with friends is cool.  More cool is encouraging them to enroll so they can receive my blogs (and other cool leadership info) directly.  Sign up yourself, too!