Undercover Bosses All Have The Same Epiphany 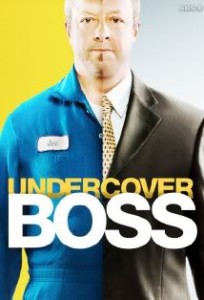 If you’re a leader and you haven’t yet tuned in to watch Undercover Boss, I highly recommend you make it a staple.

Just in case you’ve been living in a cave over the past two years, Undercover Boss – shown Sunday nights on CBS – features a CEO or high ranking executive from a well known American company who’s disguised, given an alias, and sent to work as an “undercover” entry-level employee in their own company.

The undercover boss spends an entire week working side-by-side unsuspecting employees, and returns soon after to reveal his or her true identity and all they have learned about the business and front-line employees.

Nearly 40 million people watched the premier episode of this show in 2010, and it has ranked high in the ratings every since.   I believe that Undercover Boss has struck a nerve with viewers who correctly assumed top level executives had a thing or two to learn about the real working lives of subordinates.  They know first hand that leaders today are out of touch with their people – and what support they need in order to be fully engaged at work.

To that point, what does it say about leadership today that we can disguise a CEO in a tee shirt, cap and jeans and not a single employee recognizes him in the course of an entire week?

Most of the bosses who go undercover end their week with the same epiphany:  They see how connecting more with subordinates – and supporting their needs – is the greatest way of improving motivation and engagement.

Last season, Joe DePinto, CEO of convenience store chain, 7/11, was a typical example.  Relying on a two-day beard to protect his anonymity, DePinto visited various company locations and showed little competency for any of the tasks his employees had mastered.   He spilled coffee, fell when wheeling boxes, and slowed down operations at the company bakery.

Even though DePinto struggled with every task he was assigned, he uniquely impressed me as someone who already leads from the heart.  Very clearly someone who knows it’s his job to enable and value workers, he created a program that fosters employee career growth.  “We have a whole pipeline of talent here,” he said.  We’re going to tap into it.”

When DePinto completed his undercover week, he revealed the most important lesson he’d learned.   “Our people don’t have a lot of major needs,” he said.  “They want to be appreciated for what they do and recognized for their performance.  I always knew that, but it can easily get away from you in the heat of daily business.”

No leader today should need a week undercover to arrive at this conclusion, of course, but almost every Sunday night I’m reminded most do.

Sharing these posts with others is cool.  Even better, ask friends (you too!) to sign up here and receive my blog and other special gifts directly.