Help Another To The Top Of The Mountain And You Arrive There Too. 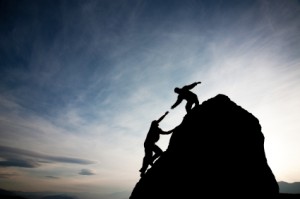 “When you have a wit of your own, it’s a pleasure to credit other people for theirs.”
Criss Jami

Very recently, I learned that content from my book had been plagiarized.

In a blog ironically titled, Lead From The Heart, a well-known leadership consultant in the Twittersphere – someone with a very large following – liberally and literally cited my work.  The only problem was that the ideas weren’t attributed to me.

I’ll be honest; it felt like a punch in the gut to see original concepts and expressions I worked several years to produce be purloined by a peer.  As you might imagine, I was immediately filled with anger and I also had enormous feelings of disbelief.

Via back-and-forth e-mailing, the blogger quickly agreed to remove the post.   While I was very grateful for this action, I requested that the piece be revised so that my work could be properly credited.  I wasn’t seeking a mea culpa or any kind of public shaming.  But noting that the blog already had been sent out to hundreds of thousands of people, I felt it fair that the wrong be made right.  Because enough time now has gone by, however, it now seems entirely unlikely my request will be fulfilled.

I’ve spent the past couple of weeks on vacation where I had lots of time to think about this.  The big question I kept asking myself was, “Why would someone in a leadership role be so reluctant to give credit to someone else, especially when the ideas were inherently supportive of her own?”

I think I have a big part of the answer and it offers great insight to anyone who aspires to becoming a truly exceptional leader.

As I wrote in my book, it’s been my experience throughout my twenty-five-year career that too many leaders “go to work every day fearing for their jobs and influenced to neglect or even disregard the needs of others.  It’s an underlying type of energy and rhetoric that pervades a lot of companies and influences leaders to compete – and not to support the success of the very people they lead.  In it’s worst manifestation, these leaders become cut-throat and entirely self-serving because they have a feeling of lack that says, ‘I have to be this way to survive.’  At the root of this fear is the pervasive belief that we live in world where everything is limited – a world where if another person’s light grows brighter, theirs must naturally and equivalently grow dimmer.  It’s a feeling of scarcity – an entrenched conviction that there is never enough to go around – and it leads people to concluding, ‘Every man for himself.’”

In his book, The 7 Habits of Highly Effective People, the late Stephen Covey called this belief system a “scarcity mentality.”  Others call it a “poverty consciousness.”  It’s a fear-based mindset that has us convinced that helping someone else inevitably will lead to our own demise.  By shining the light on another, the logic goes, we’ll end up catapulting that person to superior recognition, money, titles or even career opportunities.

Covey, and many enlightened others, point out that the far more healthier – and accurate – belief system is called an “abundance mentality,” a confidence that there is truly enough of everything.   When leaders bring an abundance consciousness to their roles, they believe the universe has no limits on how many people can be successful.  They also believe they inherently expand themselves by helping to expand others.

What I know to be true is that the greatest leaders know how the universe works.  They understand the words of Ken Blanchard who said, “Good leaders are committed to helping other people win.”  Because they are entirely secure in themselves and in their talents, they routinely and passionately amplify the work and efforts of others.

What’s really interesting is that people intuitively sense when someone is secure in themselves and inclined to be generous with others. Generally, we perceive people like this as being extremely powerful.  We want to work for them.

So, remember this: sharing the spotlight with others takes nothing away from a leader.  Instead, through the magical laws of nature, the amount of light becomes intensified, shining brightest on the leader.

We always are grateful when you share these blogs with friends and colleagues on all social media.  If you would like to receive Mark’s articles directly, we invite you to sign up here.  (We promise not to share your name or to solicit you for solar paneling).