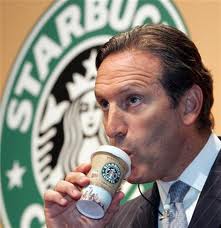 “Some people say, ‘Come on, markets are not about morals, they’re about profits.” I say that is old thinking.  That’s a false choice.  The great companies will be the ones that find a way to have and hold on to their values while chasing profits, and brand value will converge to create a new business model that unites commerce and compassion.  The heart and the wallet… The great companies will be sharp to success and at the same time sensitive to the idea that you can’t measure the true success of a company on a spreadsheet.”
U2 Lead Singer, Bono

Few leaders in business inspire me as much as Starbucks CEO, Howard Shultz.

As the head of a forty-year-old iconic organization he’s grown to nearly 18,000 worldwide stores and 150,000 employees, he not only demonstrates what it means to lead from the heart – he personifies it.

By intentionally managing with both his mind and heart, Shultz most certainly remains an anomaly amongst business CEOs.  That most leaders continue to let the mind alone do their bidding has everything to do with the way they likely were taught.   Virtually all of us have been imbued with the idea that the mind is the highest form of intelligence possible – especially when it comes to managing in a business environment.  We’ve been groomed to be intellectual, to subordinate feeling and to purposely marginalize our hearts.

In light of this, I’d like to give you four great examples of how Schultz thinks differently, acts differently and achieves differently.  His beliefs about the heart in leadership offer a profound contrast to standard operating procedures.  And the remarkable and sustained performance he’s attained, I believe, soon will usher in emulators – people in leadership roles who will seek to maximize their own employees’ engagement and productivity by adopting his inspired managerial practices.

As a teenager, Schultz came home one day to find his father laid-up on the couch.  While delivering diapers on a cold Brooklyn day, he’d slipped on the ice and broken his hip and leg.  Without being given any severance or shown any genuine concern or support by his employer, Schultz’s father was fired on the spot.

In Greek mythology, there’s the story of Chiron, a centaur who was deeply wounded by a poisoned arrow and needed healing.  We learn from the tale that the toxins Chiron carried with him for the rest of his life served as a stimulant to make him more sensitive, tolerant, and understanding to the experience of others.  According to author, Paul Pearsall, almost every great leader in history has his own Chironic poisoning that contributed to their extraordinary accomplishments.

It’s clear that by seeing how his own father had been treated by his boss that Schultz was influenced to regard his own workers far differently and more compassionately.   As a result of this experience, expressing his concern for the well-being of his employees became a life long practice.  That inclination to care for people, and to give sincere consideration to how all managerial decisions and actions affect them, comes directly from the man’s heart.

2.    Unwavering In His Values

While you wouldn’t know it today, Starbucks was in a major meltdown mode seven years ago following the launch of the Great Recession.   The stock price plummeted, scared-to-spend customers suddenly stopped coming in, and hundreds of stores were bleeding money.

Knowing that the company was on the brink of disaster while annually spending $250 million dollars on full-time and part-time employee health care, institutional shareholders demanded that Schultz eliminate the benefit.   Ignoring the huge cost-save and it’s potential to immediately drive up his firm’s share price, Schultz didn’t flinch.   Believing that his providing health care was a competitive differentiator that allowed him to attract and retain great workers – people who would every day be counted on to deliver the brand’s high caliber customer service – he argued that making such a cut would be a pyrrhic victory.

Maintaining the perk under that kind of financial pressure, and when so many other organizations acted differently, only led to greater employee loyalty and commitment.  We now know that Starbucks rebounded and has seen its stock price fully recover.

Were Schultz to only have consulted his mind in making this important decision, it’s almost certain he would have acted differently.  His heart told him to look out for the people who worked for him and the lesson is they repaid in him kind.

In the corporate world, business decisions almost always are tied to financial analysis and projections.  As the visionary who dreamed up the whole idea of making a coffee-buying outing an experience of theatre and heightened pleasure, Schultz has an instinctive feel for what products, store design and culture he wants customers to experience.  When it comes to decision-making (including big choices like whether or not to launch a new product or to close all his stores for 3 hours for employee training), he routinely acts upon his intuition – intelligence from his heart.   He most certainly knows his numbers, but he’s very willing to go on gut when deciding whether or not to act.  This is rare.

In his most recent book, Onward, Schultz uses the word “heart” no fewer than 33 times (I counted) in just over three hundred pages.  He makes “heartfelt pleas,” “speaks from his heart,” offers employees “hearty congratulations,” and concerns himself with the “minds and hearts of his customers.”  He’d like his stores to become the “heart of the neighborhood” and knows what’s at the very “heart of being a merchant.”   In his book, Schultz has chapters on “Love,” “Loyalty,” “Benevolence,” “Courage” and “Truth In Crisis.’   Schultz knows he’s “at the heart of Starbuck’s operations” and has the clearest understanding that what people feel in their hearts has far greater impact than anything he can possibly say.  This is simply uncommon and inherently extraordinary.  It’s also especially and uniquely informed.

If this heading seems like it belongs in a different blog, you’re mistaken.

The whole idea of leading with greater heart is to drive better and more sustainable performance.  When you openly value employees, develop, encourage, recognize and reward them, you end up with a highly charged workforce.  Sensing their needs are being authentically met, employees reciprocate by excelling and delivering beyond their expectations.  It’s a law of nature.  Schultz very much knows this.

It’s pretty clear that Starbuck’s CEO thinks about his organization in virtually every waking hour.  Consequently, he’s been known to call 9:00 PM Sunday night meetings at the spur of a moment or to call an executive at home on Christmas Eve.  While these events aren’t routine affairs – and did occur when the firm was greatly struggling – the point is Schultz has great expectations for his employees and for the performance of his firm.   As validation that Schultz’s leading from the heart rewards all constituencies, the ten-year price appreciation on Starbucks’ s stock is nearly 400%.   The ten-year return on the S & P 500 Index is just 60%!

At Starbucks, it’s Howard Schultz’s ambition to “inspire and nurture the human spirit one person, one cup, one neighborhood at a time.”   You can’t succeed on a noble mission like that – or even to conceive it – without routinely conferring with the heart.

We always are grateful when you share these blogs on all social media with colleagues and friends.  Our reward in writing these is knowing people found them helpful and insightful.

We invite you to sign up here to receive them directly.  We promise to never share your information or call you during dinner.