The Profound And Enduring Power Of Encouragement 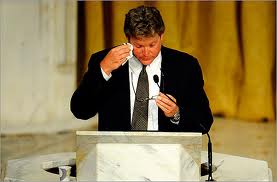 During the eulogy he gave for his father, Senator Ted Kennedy, Teddy Kennedy, Jr. recalled a day shortly after losing a leg to cancer when his dad invited him to go sledding on their steep, snow-covered driveway.

Following his first reluctant ride down the slope, young Teddy slipped and fell as he attempted to walk back up the icy road.

Saddened and terribly frightened, he began to cry.  “I can’t do this!” Teddy told his father.  “I’ll never be able to climb up that hill!”

Facing the thousands of people who had filled the church for his father’s funeral, Teddy related how his father responded: “He lifted me up in his strong gentle arms and said something I will never forget.  He said ‘I know you can do it.  There is nothing that you can’t do.  We’re going to climb that hill together even if it takes us all day long.’”

Greatly inexperienced with his new prosthetic leg, Teddy said that his father convinced him at that moment that he was going to be okay.

“My father taught me our most profound losses are survivable,” Teddy said.  “Our ability to transform them into positive events is one of my father’s greatest lessons. He taught me that nothing is impossible.”

Ted Kennedy intentionally put his son is a situation he knew would be challenging and difficult, but also one he knew would help restore Teddy’s self-confidence.   His actions conveyed the deep belief he had in his son’s capacity and illustrated the support he was willing to give in order to ensure Teddy’s making it back up the driveway.

Thus, there really are no words more powerful for a leader to say to an employee than these:  “I believe in you.  I know you can do this.  I will help you.”

What I know for certain:  an expression of confidence in another person is one of the greatest transformational gestures a leader ever can make.   Every human being wants to grab the golden rings in life and to never settle for brass.   But most also need a boost in confidence to reach for it.

To receive these blogs directly, please sign up here. Sharing with others is encouraged!