These Days, We’re All Disgruntled Workers 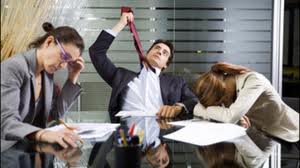 The average Goldman Sachs employee earns in excess of $350,000 per year, and we’re assured Greg Smith, who most visibly quit his job there last week, was paid substantially more.

And, in leaving his long-time employer, Smith didn’t abandon just a fat salary. To regain his career freedom, he knowingly forfeited a considerable sum in deferred compensation as well.

Most people in the world, of course, can only dream of being so highly paid for their work, so it’s a good assumption that a very large percentage of the working population has summarily judged Smith’s resignation as an act of complete insanity.

If they could coach him, they would say: “Go back to Goldman, Greg!  You have a terrific deal!  Subordinate your concerns about a declining corporate culture and profit-at-any-cost leadership. You have a penthouse to go home to at night!”

But this scenario is a complete fantasy. Regardless how little or much they are making, U.S. workers have begun to quit their jobs – in droves – to go in search of organizations, and leaders, they feel will better support their needs. As Smith’s actions show us, pay no longer is the driver of engagement or job satisfaction it once was.

Last year, a MetLife study published in USA Today showed that at least one in three U.S. workers was quietly planning their departure and already had begun looking for a new job. Stunningly, the report noted that most bosses were oblivious to how unhappy and inherently disengaged their employees had become, and would be caught flat-footed when their workers walked out.

Right after Thanksgiving, Time Magazine reported the first evidence that MetLife’s predictions might be right: “With 14 million people still unable to find work and job prospects seemingly bleak … in September, 2 million people gave notice.” Extreme unhappiness on the job was cited as the reason so many workers would take such a risk. Inherently clear was that a lot of people had lost faith in the leaders for whom they worked.

In just the past few days, payroll company ADP confirmed that employee turnover is building even greater momentum. “More people quit jobs in February than in any time since the start of the Great Recession.”

Having been an executive leader for nearly 25 years, I know what it’s like to read statistics like these and to dismiss them as unrelated to my team and business. I suppose it’s even human nature to go into some form of denial when first confronted with bad news. Here’s a good example.

After Greg Smith resigned, Goldman Sachs CEO Lloyd Blankfein and President Gary D. Cohn defensively characterized him as being “disgruntled.” Then they attempted to further discredit Smith by referring to him as just one of the firm’s 12,000 vice-presidents.

Acting on self-preservation instincts, we’re inclined to shoot our messengers and not fully digest and consider the information they bring to us. This time, especially, we’re advised to ponder and respond to the feedback.

While few of us noticed, employee satisfaction has been declining for at least a generation. New York’s Conference Board, a century-old non-profit research organization, began measuring worker happiness in 1987. Its discovery is that the percentage of contented employees has fallen every year since then – regardless of good economic times or bad.

People (human beings) have grown disenchanted with their jobs largely because their needs have greatly changed. What once inspired them to put their hearts into work no longer succeeds.

Dating back to the Industrial Revolution, people once secured jobs to provide for their most basic needs, food and shelter. In those days, and for decades to come, a paycheck was accepted as an entirely sufficient exchange for one’s efforts.

But as it has grown increasingly easier for most people to put food on the table and a roof over their heads, what makes people truly happy and engaged at work now has very little to do with pay.

Subsequent employee engagement research produced by the Conference Board reveals that over and above salary and bonuses, what inspires human performance in the 21st century workplace is emotional currency.

Business leaders – and CEOs – take notice. To keep your employees from leaving, and then to rejuvenate their on-the-job commitment, you’ll need to adopt entirely new practices – ones that authentically address what people now require from you:

Your people want to contribute to the success of an organization they respect; to work directly for an empowering and caring boss; to be given opportunities to grow and progress; to enjoy reasonable job variety; and to have their efforts authentically valued and acknowledged. And all across the world, these five things matter more to people than pay.

There’s more you need to know. Employees cite the absence of concern, care and connection from their leaders as the primary reason they are so unhappy. They want to be fulfilled by the work they do and to know their contributions matter. Therefore, when leaders fail to relate more personally, to understand and genuinely support their individual motivations and aspirations, workers wither.

There are some enlightened organizations that are well on their way toward realigning their leadership cultures and to more purposively supporting the higher needs of their workers. They’ve begun to weed out the non-collaborators, leaders who are unwilling to advocate for and even nurture the people they manage. This list includes Starbucks, Four Seasons Hotels, Wegmans Food Markets, Google, REI and privately held SAS.

Last year, Wharton finance professor Alex Edmans evaluated the stock performance of organizations named to Fortune magazine’s annual list of the “Best Companies to Work For” and proved that companies making the list from 1984 to 2005 outperformed peers by 4 percent per year. These companies are reinforcing our understanding of natural law: “To give is to get.”

Roy Disney once said: “If you want someone to care, capture their minds and their hearts.” The heart has long been ignored in business, but bringing it back into balance with the mind in how we lead people has become essential to the recovery, and ongoing success, of the American economy.

Note: This same blog was published by Reuters.com on March 23, 2012 http://blogs.reuters.com/great-debate/2012/03/23/these-days-were-all-disgruntled-workers/

We love it when you like these blogs and forward them on to others!  If you would like to receive Mark’s blog directly (never any strings attached), please sign up here.