Why Leaders Owe Greg Smith A Debt Of Gratitude 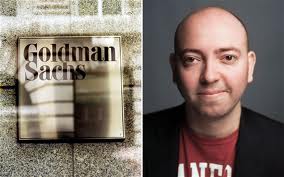 There is something in the pang of change.
More than the heart can bear,
Unhappiness remembering happiness.

In light of the financial meltdown and all the pain it caused, it’s certain many readers sought to confirm suspicions that Wall Street long has been driven by greed at the expense of the public’s interest.

Smith alleges as much saying that during sales meetings, “not one single minute is spent asking questions about how we can help clients.  It’s purely about how we can make the most possible money off of them.”  Pointedly, Smith reveals that his former colleagues routinely and callously discussed ways of “ripping their clients off.”

But there is something in the way the thirty-two-year-old Smith quit his job – and the only organization for which he’d ever worked since becoming a college intern – that appears to be piquing an even greater amount of our interest.

In order to preserve future career options, virtually all workers go to great lengths to make their exits as amicable as possible.  So, how are we to reconcile the wild and seemingly irrational behavior of this intelligent and well-educated Mr. Smith?  He must know what we do – that his career on Wall Street (at thirty-two!) is over.  He’s burned a bridge with every investment bank operating in the world today.

Some are predicting that Smith has a book deal or some other imminent and exploitive way of earning a big payday for quitting so publicly and dramatically.  Time will tell.

I’m not as cynical in my interpretation of Smith’s motivations and believe he’ll soon prove to be an honorable and courageous whistle blower, someone who cares very deeply about Goldman Sachs (even if he can no longer stay) and genuinely wants it to recover the values it once stood for – before it’s too late.

A former long-term and senior Goldman Sachs employee told me last week he also believes his old company is not what it once was.  “The values of caring for customers over profits always ranked highest,” he insisted.

I detected a sense of wistfulness in his remark – an indication that he still carries a deep fondness for his alma mater and wished what Smith had written wasn’t true.

According to my friend, Goldman Sachs once had a truly sterling culture, one that equivalently esteemed all constituencies: clients, employees and the organization’s profit.  “The word ‘employee’ was even seen as a pejorative,” he said.  “Engagement was so high that no one wanted to think of themselves as just an employee.  We were all wedded to the firm.”

What both my friend and Smith were clear on is that Goldman Sachs leadership team somehow has strayed from their original gold-standard values and has inherently changed for the worse.  Smith described the firm as once having the driving ideals of “teamwork, integrity, a spirit of humility and always doing right by clients.”  He believed “this culture was the secret sauce that made this place great and allowed us to earn our client’s trust for 143 years.”

As an explanation for his resignation, he said “I am sad to say I look around and see virtually no trace of the culture that made me love working for this firm for many years.  I no longer have the pride or the belief.”

While Goldman Sachs’ CEO, Lloyd Blankfein, and President, Gary D. Cohn defensively chose to characterize Mr. Smith as “disgruntled” and attempted to further discredit him by referring to him as just one of “12,000 Vice Presidents” amongst the firm’s 30,000 employees, the organization should instead be thanking him.

Goldman Sachs’ profit-at-any-cost mentality has been put under an unflattering spotlight and Smith’s high-octane exit likely will become the catalyst for positive and needed change.  Should Goldman Sachs act swiftly and authentically to this end, in fact, they’re very likely to retain clients and employees – and thrive for the foreseeable future.

But leaders across American business should also thank Greg Smith for resigning in such a visible way.  That’s because Smith has called attention to a major shift in what people need in order to thrive and be fully engaged in their jobs.  Pay alone – even very high pay like Smith earned – no longer can be counted on to drive employee commitment and loyalty.

What many leaders haven’t noticed is that the needs of all workers have radically changed.  The evidence of this is that millions of people have begun to walk away from their jobs, even though 12 million people still are unemployed and jobs remain scarce, because those needs are not being met.

The payroll company, ADP, reported that more people quit jobs in February than in any month since the Great Recession began.  And numerous studies predict that at least one-in-three US workers are actively seeking a new job.  Most of this discontent is because people have lost faith in the leaders for whom they work.

Employee engagement research produced by New York’s Conference Board shows that workers (human beings) now have five critical needs that must be met before they can fully put their hearts into work.  People want to contribute to the success of an organization they respect, work for a trustworthy, caring and empowering boss, have opportunities to grow and develop, be given reasonable job variety, and have their efforts recognized and valued.

And, all across the world, these matter more to people than pay.

In a highly public way, Greg Smith has shown that what people require in order to be inspired and fully committed in their jobs has irreversibly changed.  Pay, in all of its forms, no longer will inspire commitment and engagement as it once had.  Twenty-first century employees are seeking to find fulfillment and purpose through their work – a truly monumental shift in values.

For leaders to succeed, therefore, they must change (and rapidly) by adopting practices that support these higher human needs – in every employee they manage.

If you like these blogs, we appreciate it when you share them with friends and colleagues!   And if you would like to receive them directly (no personal info shared or slimy subsequent marketing), please sign up here!