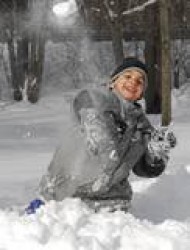 Procrastination is the enemy of the leader….

When I was ten-years-old, I became a paperboy.

Six days a week – all year long – my responsibility was to get people their papers at the same general time each day and, once a week, to knock on doors and collect my pay.

Here’s a quick story of one experience I had along my route that taught me an invaluable lesson about life – and leadership.

A day after over a foot of snow had fallen, I bundled up in warm clothing and trudged through the streets carrying all my papers.  It was impossibly cold out and I was weary from the task before I’d made it to half of my houses.

As I reached the long walkway of my last customer’s home, I felt a sense of exhilaration knowing I was a responsible kid who kept his commitments in brutal weather.

But just after delivering the paper, two boys who lived there came out from behind a tree and pelted me with a stream of snowballs.  Completely caught off guard, I was hit in the face and in the back – and these kids were unrelenting!

While unaccustomed to surprise attacks like this, I knew what to do whenever someone threw a snowball at me.  Fight back!

The snow was wet and perfectly packable and I quickly made several balls before setting aim at my rivals.   By the time I was ready, my friends had made it to their front door and were seeking refuge inside.  Not wanting to let them get away unscathed, I launched my snowballs in rapid-fire succession.

I hit one of them with my first shot and the moment suddenly seemed exhilarating.  But one of my subsequent throws broke right through a long pane of glass next to the front door.  Fun over.

The kid’s parents weren’t home and so I left without any resolution or understanding of the consequences.

For the next twelve months (seriously), I delivered the paper to that house without ever knocking on the door.  Not only didn’t I address the issue of the broken glass, I also didn’t collect for the paper.  I was just too afraid of what I would have to face – and, of course, my fear only compounded as the weeks and months passed by.

While delivering papers on my twelfth birthday, I convinced myself that it was time for me to act with greater courage.  And when I walked up that long pathway to drop off the paper, I rang the doorbell.

When my friends’ mother answered the door, I told her that I hadn’t collected for the paper in a long while and needed to do that.  In response, she made clear that we had another matter to settle as well.

My customer asked me how much she owed me for the paper.  In today’s dollars, the bill would be equivalent to about three-hundred dollars – but in those days a year’s subscription was about fifty bucks.

She then informed me that her two sons had been entirely honest in explaining how the window got broken and she was not inclined to hold me fully accountable for the costs of repair.  Because of how long I’d waited, however, she asked me to split the cost of the glass and I was grateful it wasn’t far worse.

For an entire year, I had allowed the fear of what could happen to immobilize me.  Rather than face the music, I dodged my friends’ mother and avoided directly confronting the problem.

Throughout my subsequent career, I often was faced with a similar dilemma:  “Do I deal with this problem swiftly or see if time will lead to things working out?”

Early on, there were times when I ignored the lesson of my childhood and extended the time before I acted.  Virtually never was I rewarded for my patience.  Small problems almost always grew bigger.  And when you lead other people and fail to deal with problems promptly, I discovered, your delay tends to very negatively affect that team’s morale.  Being direct in your communication, and taking direct action, are therefore requisites for exceptional leadership.

So, take it from someone who should have learned the lesson the first time around. Address any interpersonal hot spots – to include performance shortfalls – without delay. You’ll sleep better, too.  And please also remember this:  Our failures in leadership most often result when we know what course to follow, and then fail to take it.

Sharing these blogs with friends and colleagues is cool!  If you would like to receive more posts — along with other leadership related information from Mark, please sign up here.